The Climate in England

What should you expect when it comes to England’s climate? Most people might immediately think of rainy skies. And of course England gets rain – how else do you think England’s lush forests, great gardens, heathery hilltops and patchwork fields stay so vivid and green? But England is so much more than a few rainy days.

While yes, it does rain in England, it is less rainy that you might think. It gets on average 345 mm (13.5 in) of rain per year in York while the city of London – 596 mm/year or 23.5 in/year – actually gets more rain annually than most of the English countryside!

England has a mild climate meaning we don’t see dramatic differences across the seasons. Most days will see a mix bag of weather. Rain falls in short, passing showers, but the sun shines most days too. This type of weather is actually perfect for hiking, as the cooler temps interspersed with sunny spells are great for helping you stay comfortable. This is also what gives England its beautiful lush countryside and beautiful woodland. England’s climate also means that you’re almost guaranteed a mix of sun and rain on your holiday to England.

Take me straight to: 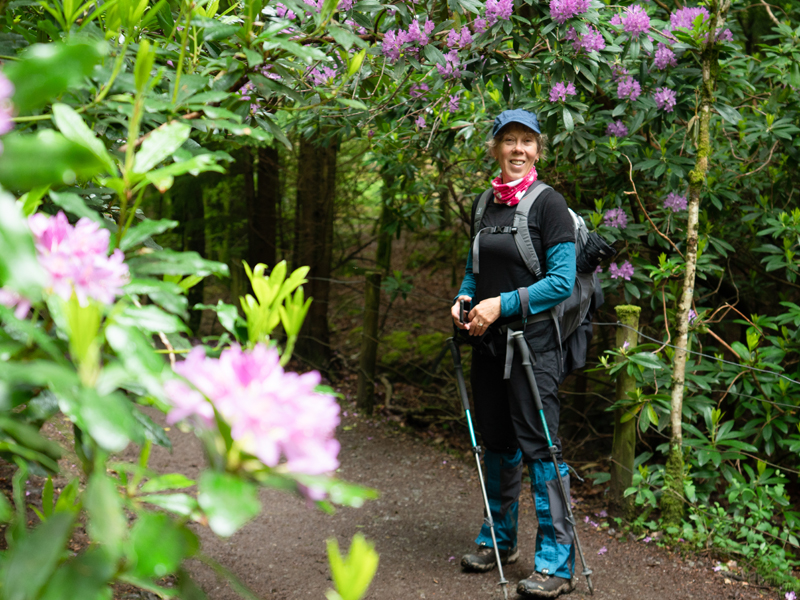 Arguably England’s prettiest season, spring varies depending on where you are. While winter can be long and a bit grey, spring is when England simply bursts to life. Temperatures are generally still fairly cool, and there can be some snow on the mountains. Expect daytime temperatures to be around 10-16°C (50-60°F), with evening temperatures falling to 3°C (37°F). Rainfall is surprisingly low during this season, ranging from 20 – 27 mm (0.7 – 1 in) in the north, though in the southeast rainfall is a bit higher, and up to 35mm (1.3 in) per month in the Cotswolds.

One of the first signs that spring is coming is the arrival of snowdrops, which usually blossom at the end of February. Other flowers you might see are the yellow lesser celandines, daisy-like wood anemone, bluebells, golden cowslips, wild garlic, white sorrel, violets, cuckooflower and the pink flowering shrubs February daphne. Even if the names don’t sound familiar, if you’ve been to England in spring, you’ve likely spotted them all!

In the north of England especially, there are many sheep pastures, and in the spring through early summer, expect to see new lambs in the fields. 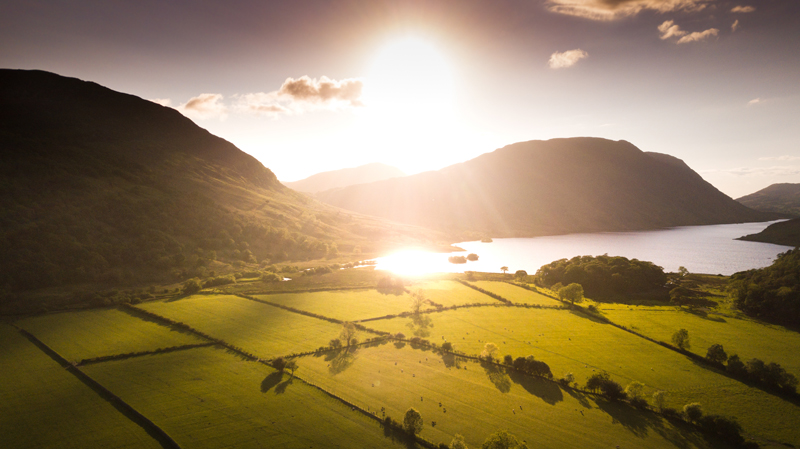 Summer is England’s driest season, with average rainfall in July and August ranging between 29mm and 36mm (1.14 – 1.41 in) per month in the southwest and north. Though drier than winter seasons, this is still England, so expect some rainfall, usually in the form of localised flash rains and light drizzle. Temperatures generally range from 15 to 21°C (59-69°F) during the day, though nighttime temperatures can cool down to 10°C. Expect a combination of sunny and cloudy skies. The days are longest during this season, with 16.5 hours of sunlight in June, culminating on June 21st, the Summer Solstice.

England in summer is still a brilliant, lush green. The meadows are in full bloom and the woodlands are thick with flora and fauna. The warmest parts of the country are usually the southeastern corner, but summer in the mountains and lakes of the north is beautiful. While busier than other seasons, it’s not hard to get off the beaten track in the countryside and leave the day trippers behind. 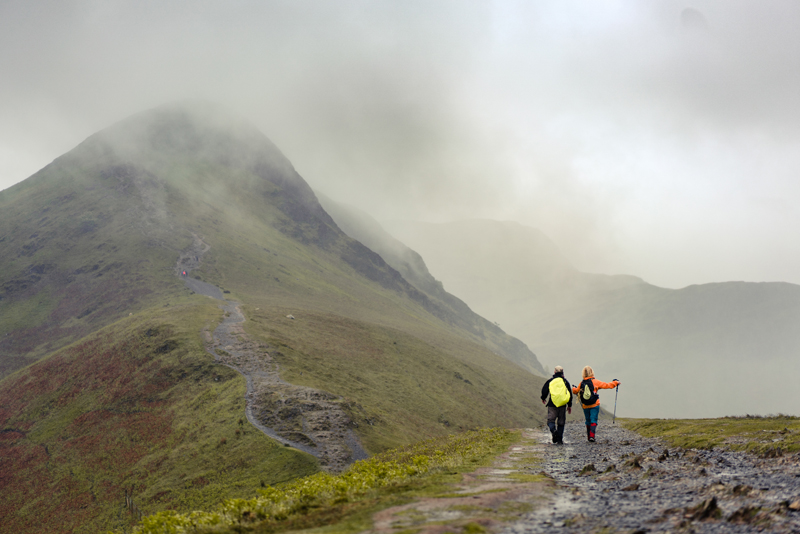 Autumn is a beautiful time of year in England. The temperatures can still be fairly mild, particularly at the start of the season. By October, the colours of the landscape change, erupting into a canvas of golden browns, deep yellows, vivid reds and fiery oranges. With fewer dramatic windstorms to blow the leaves from the trees, England’s spectacular fall foliage is visible during the entire season. From the brilliant leaves of the Cotswolds to the haze of purple heather topping the moors in the Yorkshire Dales, England is alive with colour from September to November.

In early autumn, you can expect longer days – with just about 13 hours of daylight – and slightly higher temperatures, around 15-18°C (59-64°F). Later in the season, the days get shorter, and the temperatures will fall to a high of 10°C (50°F). England – and the countryside in particular – tends to get fewer tourists during this season. 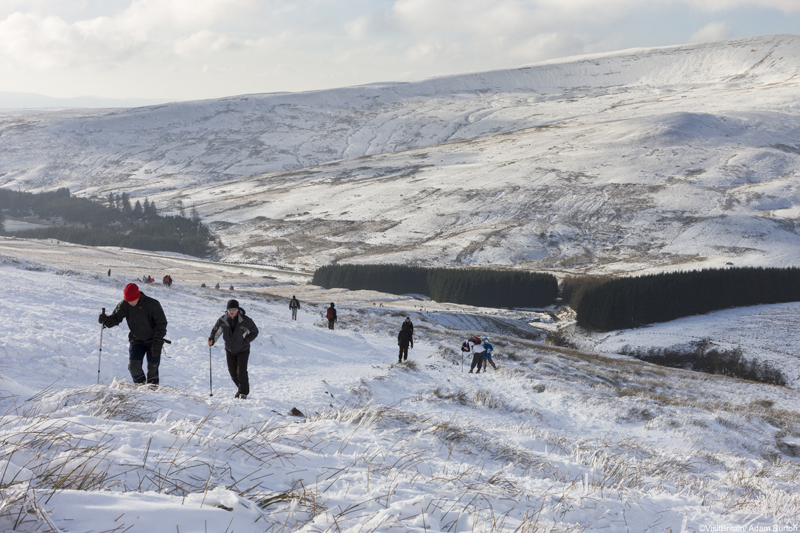 Winter in England is far from our busiest season, but it is a wonderful time to travel, provided you have the right kit. It can be quite chilly, with temperatures between 1 and 8°C (33-46°F). The days are short but the opportunities to see stunning sunsets and sunrises abound. On clear days, enjoy winter sunrises as late as 8:15 am and sunsets around 4:15 pm. While the lowlands won’t get much snow, you should see some snow in the uplands, particularly around the Peak District and Lake District.

While the days might be shorter, a crisp winter’s day can make for an amazing hike as there are few other hikers out at that time, meaning you’ll get that amazing vista all to yourself. Head back to your accommodation for a cosy pint in front of a roaring fire. Expect on average about 30 mm (1.8 in) of precipitation per month during winter, though keep in mind some of that might be snow.

What to Wear in England

As Alfred Wainwright, travel writer, Lakeland fellwalker and author of the first guidebook to the Coast to Coast trail once said, there is no such thing as bad weather – just bad clothing. This is one of our favourite sayings! When heading outdoors in England, it’s important to be prepared with the right gear to make sure you enjoy your outdoors adventure. It can be quite wet and boggy, so pull on your study, waterproof boots and waterproof top layers such as a jacket and perhaps trousers if rain is forecasted.

Be sure to wear layers too so that you can whip on or off a layer on the trail. Good layers, waterproofs, and sensible shoes do a lot to mediate unpleasant weather and enable you to get out despite a bit of rain. It can be windy so a hat and gloves might come in handy. We’ve put together extensive kit lists and clothing recommendations for all the outdoor activities that we provide, plus instructional videos. Get all the info below.

When to Hike England’s Coast to Coast Path

What Food and Drink Is Yorkshire Famous For?

Our business was created to share our passion for the inspiration, spirit and value of the natural environment. What we didn’t know when we started our business many years ago, was how significant the threat of a changing climate would become. While we have always sought to run an environmentally sustainable business (and have been independently recognised several times for doing so), we feel the time has now come to ramp up the action, work harder and act more creatively to respond to the climate emergency with renewed focus and energy.

Six expert travel companies. One place for all your adventures.

Specialists in offering a range of adventure holidays, tours and incredible wilderness experiences. Wilderness Ireland take their clients to the most remote and beautiful regions of Ireland, all while staying at the most welcoming accommodations and delivering outstanding customer service.

The ultimate collection of European cycling holidays. BSpoke's cycling experts can tailor-make your perfect cycling holiday where you can travel at your own pace or in a group of like-minded individuals. A BSpoke Tour is all about being as restful or as adventurous as you desire.

Britain's original ski travel agency and tailor-made ski tour operator, Ski Solutions has been arranging ski holidays for over 30 years across Europe and North America. The Ski Solutions team are all skiing experts, and their wealth of knowledge and passion for the mountains will ensure you experience a truly memorable ski holiday.

Cycling for Softies is a luxury cycling tour operator providing gourmet cycling adventures in France and Italy. These are leisurely cycling tours winding through vineyards and staying in high end accommodation where the emphasis is as much on the food and wine as the cycling. Welcome to life in the easy lane.

Be the first to hear about new trips, locations and activities with our monthly newsletter