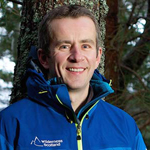 Back in 2001, I gave up a career as a surveyor and started the Wilderness journey with a second-hand Land Rover and a third-hand laptop. I didn’t have much idea of how to run a travel business, but having worked and travelled around the world was convinced the available adventures on our doorstep were as good as any. After co-founding Wilderness Scotland, Wilderness Ireland followed some years later. Having run many trips in England since 2012, the logical next step was to launch a dedicated company for sharing our passion for the great outdoors in England. For some 20 years now, I’m proud to be part of an amazing team of individuals who are committed to providing the very best travel experiences possible and supporting the environments and communities where we work.

It has to be the Yorkshire Dales National Park. For me this is the best place to ride your bike in the UK – the roads are quiet, the variety of routes amazing, the scenery always lifts the spirits and the cafes are second to none. The 20km through the rolling roads of Swaledale (which was used in the Tour de France in 2014) is as good as it gets.

Not a Lot of People Know This

I once beat 5-time Olympic Gold Medalist Sir Steve Redgrave. It was at Noughts & Crosses but they all count.

The 7 Best Long Distance Cycle Routes in the UK

Be the first to hear about new trips, locations and activities with our monthly newsletter